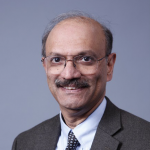 Ram D. Sriram’s technical leadership in design automation spans nearly three decades in academia and government. In the mid 1980s, during the emerging days of the Internet, Sriram envisioned a computer-networked globally distributed design environment – called DICE — and developed computational tools for supporting such an environment. The DICE project made several novel contributions to engineering design automation and computer science, such as an active object-oriented blackboard system, synchronous and asynchronous communication tools, integration of qualitative and quantitative geometric reasoning, knowledge-based design, use of asynchronous teams for solving both symbolic and numeric constraints, design rationale capture, and collaborative negotiation. His team pioneered the integration of qualitative reasoning with solid modeling. He joined NIST in 1994, where he led NIST’s successful effort to develop standards for interoperability of various computer-aided engineering systems. Sriram’s position at NIST has enabled him to take a leading role in the development and application of standards for more than two decades. His efforts include design repositories, extensions to STEP, a semantic product model (CPM), process modeling language, sustainable manufacturing, and integration of life cycle analysis and product lifecycle management systems. Sriram’s efforts have greatly contributed to manufacturing systems integration. For his contributions to computer aided design, Sriram received the ASME Computers in Engineering Division’s 2016 lifetime achievement award. Sriram has been elected a fellow of the following societies: the ASME, AAAS, IEEE (Computer Society), and the Washington Academy of Sciences. Additionally, he is a Senior Member of AAAI and a Distinguished member of ACM. 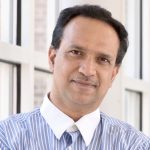 Dinesh Manocha has contributed many fundamental results in geometric computing and physically-based modeling. His earlier work focused on the use of symbolic methods and development of algebraic-numeric methods for intersection problems. He proposed efficient and accurate methods for the boundary evaluation of curved surfaces. Manocha developed many new state of the art algorithms and software systems for collision and proximity queries. He designed reliable approximation methods for challenging high-dimensional geometric problems, including swept volumes, medial axis, ­Minkowski sums, and configuration-space computations. He was among the first set of researchers that exploited the parallelization capabilities of GPUs for geometric problems and physics-based simulation. Manocha has also worked on many geometric application areas, including interactive rendering of massive CAD models, simulation of rigid and deformable models, motion planning of high-dimensional robots, multi-agent navigation, and acoustic simulation. Manocha has published groundbreaking work that has been characterized by mathematical rigor as well as geometric engineering and his work is highly cited. His group has developed a number of software packages for multi-agent simulation, GPU computing, and physics-based simulation that have been used by hundreds of thousands of users and licensed to more than 60 commercial vendors. He has supervised 40 PhD students and many of his advisees are leading academic researchers or hold senior positions in industry. Manocha was the program co-chair of ACM SPM in 2007 and 2008, and has served on the editorial board of leading journals in geometric computing, graphical models, and computer graphics.