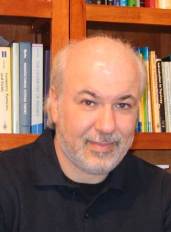 The Bézier award committee has chosen to award the 2015 Bézier Award to Vadim Shapiro to recognize his relevant contributions to the foundations of shape representations, the unification of geometry and analysis and to the meshfree modeling of general heterogeneous structures and materials.

Another fundamental theme in Vadim Shapiro’s work has been related to the unification of geometry and analysis. He developed an algebraic framework for unifying geometric and physical representations. His work has been instrumental for formulating the notions of parametric families and identifying limitations of persistent naming problem, for developing new combinatorial representations and languages based on physical laws to support the computational design process, and for the simultaneous representation of topology, geometry and physics.

Vadim Shapiro also extended implicit modeling to physical design and analysis problems, including modeling of heterogeneous structures and materials and Meshfree, query-based, simulation and optimization of shape and material models. His current work continues the quest for enrichment, unification, and interoperability of such models and representations in support of next generation of engineering languages and systems dealing with shape, material, and physical information in design and manufacturing.

Vadim Shapiro has published groundbreaking work that has been characterized by mathematical rigor as well as engineering insight. Shapiro’s specific contributions in these areas have become classics in the field and have, in many cases, remained the gold standard for the last years.