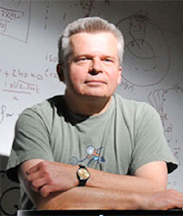 The Bézier award committee has chosen to award the 2014 Bézier Award to Jarek Rossignac to recognize the significant impact of his work in CSG, Non-manifold B-reps, Mesh Simplification, and Compression, as well as his role in founding the Solid Modeling series of symposia.

As a Ph.D. student at the University of Rochester, he worked with Ari Requicha to define constant-radius blending, constraints, and offsetting operations in CSG. This work is still being cited 30 years later. He has subsequently extended this work to variable radius blending, providing a set theoretic formulation and simple control. Other work in CSG-related topics included a paper defining Active Zones and other papers dealing with CSG rendering. This early work helped to establish the utility of CSG as a useful modeling paradigm.

His work on selective geometric complexes and on constructive non-regularized geometry helped to form the basis for non-manifold boundary representations. This work inspired advances in commercial products as well as in a large number of research projects.

His pioneering work in 1993 on mesh simplification inspired a great deal of subsequent research, and the principles he introduced have found their way into several commercial products.

In a series of papers beginning in 1998, he described ways of compressing geometry and querying compact topological data structures. Several of these papers have received hundreds of citations, the work has been incorporated into standards such as MPEG-4, and the techniques have been incorporated into several commercial products.