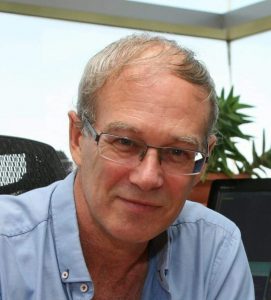 The Bézier award committee has chosen to award the 2019 Bézier Award to Gershon Elber to recognize his career-long contributions in developing computational tools that intertwine symbolic and numerical computing (including NURBS), creation and maintenance of open-source software, and his long-term service to the community as SMA EC member or SPM Chair.

Gershon Elber is a professor in the Computer Science Department, Technion, Israel. His research interests span computer aided geometric designs and computer graphics. Prof. Elber received a BSc in computer engineering and an MSc in computer science from the Technion, Israel in 1986 and 1987, respectively, and a PhD in computer science from the University of Utah, USA, in 1992. He is a member of SIAM and the ACM. He was a Visiting Professor at the University of Washington and in Boeing, in 2006-2007, and at MIT in 2018, and founded GeomCore, a geometry related company, in his sabbatical in 2000.

Prof. Elber has served on the editorial board of the Computer Aided Design, Computer Graphics Forum, The Visual Computer, Graphical Models, and the International Journal of Computational Geometry & Applications and has served in many conference program committees including Solid Modeling, Shape Modeling, Geometric Modeling and Processing, Pacific Graphics, Computer Graphics International, and Siggraph. Prof. Elber was one of the paper chairs of Solid Modeling 2003 and Solid Modeling 2004, one of the conference chairs of Solid and Physical Modeling 2010, the chair of GDM 2014, the conference co-chair of SIAM GD/SPM 2015, and the conference co-chair of SPM 2018. He has published over 200 papers in international conferences and journals, presented ten keynote invited talks, and is one of the authors of a book titled “Geometric Modeling with Splines – An Introduction”. Prof. Elber received the Ray and Miriam Klein – the Technion Research Award, in 1998, the Hershel Rich – Technion Innovation Award in 2002 for “Virtual Marionettes – Remote Collaboration Animation and Interaction” and in 2019 for “Volumetric Modeling Solutions”, the CodeArt award in 2003 (National Art in Computing Contest, third place), the John Gregory Memorial Award, 2011, in “Appreciation for Outstanding Contributions in Geometric Modeling”, and the Solid Modeling Association pioneers award in 2016.