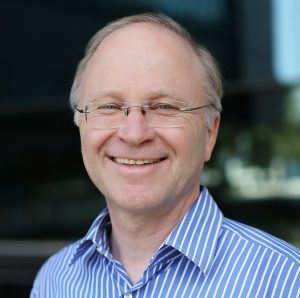 Helmut Pottmann made fundamental contributions at the intersection between mathematics and geometric modeling. An original aspect of his research is his deep analysis of the interplay between geometric considerations and numerical optimization, that take a specific form in the context of discretized objects. Prominent examples of his contributions include theoretical understanding of 3D registration using distance field and robust feature detection using integral invariants (twice voted for top cited paper in CAGD). He also contributed data modeling using kinematic structures, as well as several contributions in more classical computer aided geometric design.

In 2006 he started exploring applications of his original approach to architectural design, and published “Geometric modeling with conical meshes and developable surfaces” in ACM SIGGRAPH. He subsequently explored the underlying elegant mathematical structures, which are published e.g. in ‘A curvature theory for discrete surfaces based on mesh parallellity’, Math. Annalen 2010. His original viewpoint on architectural design has now become a new research area, called “architectural geometry”, with its own conference AAG (Advances in Architectural Geometry). He launched the AAG conference in 2008. Within less than a decade, AAG has become a highly successful conference: on 2012, AAG Paris had ~450, and AAG Zurich and AAG London had ~350 participants.